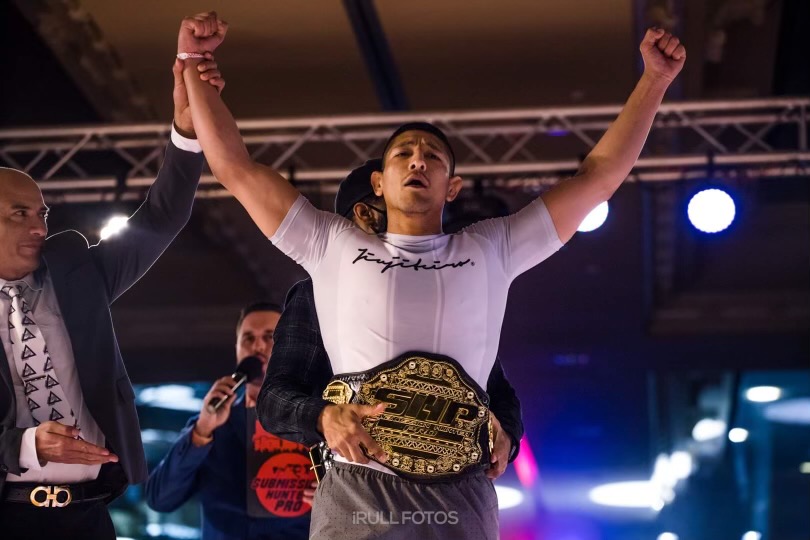 The Submission Hunter Pro is a Jiu-jitsu event held by Garcia Promotions featuring several matches ranging from kids and teens all the way to black belt adults. In the most recent event, Team Tooke black belt and instructor Jose Angel Llanas took to the stage in the black belt main event. His opponent was the very talented Joe Murphy. Many people had Joe as the favorite to win. However, less than 3 minutes in he was tapping out to a perfectly executed inside heel hook from the 50/50 guard.

Professor Jose Llanas is no stranger to the competition arena. In fact, just 1 week prior to winning this title he became the IBJJF Dallas Open Black Belt Champion. What made this match different was that it was a 10 minute match (as opposed to the normal 5 minute IBJJF Masters matches). It was a No-gi match (no Jiu-jitsu uniform) and all leg attacks were allowed (there are no heel hooks in allowed in most go competitions). And, it was a title match. Normally, all matches of this event are “submission only”, meaning if there is no submission, the match will end in a draw. However, for title matches, in the event of no submission, there would be a 2 minute over time where points would be scored in order to guarantee a winner in the absence of a submission.

As the match began the two elite level black belts shook hands and squared off for a few seconds. Jose wasted little time in pulling to the guard position and transitioning into the 50/50 guard (a position where the legs are entangled with your opponents). Both Murphy and Llanas made attempts to attack the others leg. Jose remained calm, defended his own leg and quickly turned his attention onto his opponents foot. What seemed to be developing into a stalemate quickly escalated as Jose freed himself from Joe’s defensive grips and secured the heel. 2 seconds later and with full pressure applied, Jose had his opponent tapping out.

Professor Jose now has his eyes set on the IBJJF No-Gi Pans and will continue to train and sharpen his skills at his home base, Team Tooke Mixed Martial Arts Academy. For more information on training with Professor Jose Llanas and Team Tooke be sure to visit the website at www.TeamTooke.com or call 281-955-7300

For more information on Professor Travis Tooke be sure to visit his author site at www.travistooke.com