Brazilian Jiu-jitsu Black Belt Robby Rabadi joins the podcast to discuss his business ventures and adventures. Professor Robby recently opened his second Jiu-jitsu school in Georgetown, TX. In this episode, Robby shares his struggles to get his business off the ground and how he grew it to become one of the most successful Jiu-jitsu schools in Texas!

The focus of the podcasts is interview style, speaking with different people (martial artists and non) about concepts of success, mindset and attitude toward goal setting Guests will include Team Tooke instructors, other martial artists and business owners The interviews are very candid, open and usually pretty funny.

Professor Travis Tooke is a 4th degree Black Belt in Brazilian Jiu-jitsu. He is the owner and head instructor of Team Tooke Mixed Martial Arts Academy. 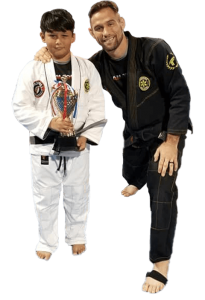 Team Tooke Mixed Martial Arts Academy specializes in the training and development of students of all ages. Through Brazilian Jiu-jitsu, Muay Thai and Mixed Martial Arts classes, our students learn realistic self defensive and competition proven techniques in a family friendly environment. Thought the techniques and training methods have produced world champions and UFC competitors, our objective is to build stronger, more confident individuals who become leaders of their own lives and the communities that they serve.

Mention the title of any podcast to receive 30 Days Free Martial Arts Classes for you and your family.

Built by Rev Marketing for business owners. The RevTalks Influencer Platform offers two platforms. One is for podcasting for audio and video. The second one is Virtual Online Training classes. For MORE Information please click the RevTalks logo below.